In certain workflow scenarios, your app may need to start (or activate) a specific app. For instance, you may have an app showing client portfolios with financial instruments. When the user clicks on an instrument, you want to start an app which shows a chart for that instrument. In other cases, you may want to present the user with several options for executing an action or handling data from the current app.

The Intents API makes all that possible by enabling apps to register, find and raise Intents.

The case with the "Portfolio" and the "Chart" app above can be implemented in the following way:

This way, the "Portfolio" and "Chart" apps can be completely decoupled. If later the "Chart" app needs to be replaced, the new app for showing charts only needs to register the same Intent in order to replace the old one (provided that it works with the "Instrument" data structure as well).

Another case where the Intents API can be useful is if you want to find (and possibly filter) all apps that have registered a certain Intent. This may be because you want to present the user with all available (or appropriate) options for executing an action or handling data - e.g., on hover over an instrument or when clicking an instrument, the user sees a menu with all apps that have registered the Intent "ShowChart" and can work with the "Instrument" data structure:

Intents are either defined through the app configuration file, or registered dynamically at runtime. User defined app files are usually located in the %LocalAppData%\Tick42\UserData\<ENV>-<REG>\apps folder, where <ENV>-<REG> must be replaced with the environment and region of your Glue42 Enterprise copy (e.g., T42-DEMO). Intents are configured under the intents top-level key of the app configuration file.

It is possible for different apps to register an Intent with the same name, which is useful when several apps perform the same action or work with the same data structure. This allows for easy replacement of apps. You may have an old app that has registered an Intent called "ShowChart" which you want to replace with a new app. Your new app only needs to register the same Intent (you can either remove the old app or leave it as an additional option for the users who prefer it). No changes to the calling app are necessary - when it raises the "ShowChart" Intent, the new app will be called.

Use the intents top-level key in the app configuration file to define an Intent:

Glue42 Enterprise provides a default Intents Resolver UI app that is enabled by default and will be started when there are more than one handlers available for a raised Intent. The Intents Resolver UI allows you to manually select which app to handle the raised Intent and to choose whether to start a new instance of an Intent handler or use an already running instance of it: 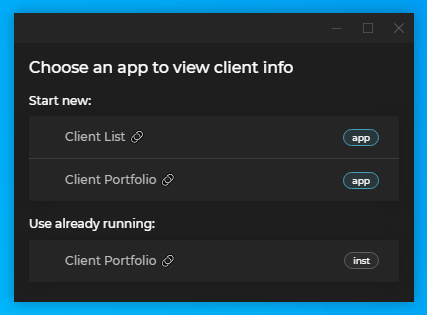 The Intents Resolver UI is enabled by default and will be used by all Glue42 enabled apps that raise an Intent. To disable it for an app, set to false the enableIntentsResolverUI property of the intents key in the configuration object when initializing the Glue42 library:

If you want to disable the Intents Resolver UI for all apps, you can use the library auto injection and initialization configuration in the system.json configuration file of Glue42 Enterprise:

To create a custom Intents Resolver App, you must provide an app configuration file for it and implement the Intents Resolver functionalities using the @glue42/intents-resolver-api library.

The @glue42/intents-resolver-api library offers out-of-the-box functionalities that facilitate the implementation of a custom Intents Resolver App.

To use the library in your project, execute the following command:

To check the name of the Intent that has been raised, use the intent property:

To listen for events fired when a new Intent handler app has been added or removed, use the onHandlerAdded() and onHandlerRemoved() methods respectively. Both methods receive as an argument a callback that will be invoked when the respective event is fired, and return an unsubscribe function. The callback receives as an argument a ResolverIntentHandler object describing an Intent handler:

The ResolverIntentHandler object has the following properties:

The onHandlerAdded() and onHandlerRemoved() methods allow you to keep an up-to-date list of the available Intent handler. After the user selects from the UI which app to start or which already running instance to use, you can find the selected handler from the list and send it to the app that has raised the Intent. Use the sendResponse() method and pass a ResolverIntentHandler object as an argument: